(Images are clickable, I suggest you do click them to see exactly what I mean) 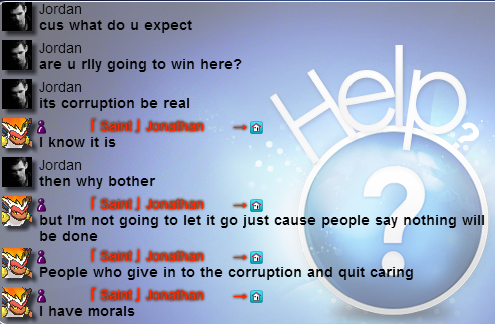 “If you married someone, that means you love every side of your significant other that you know already.
So if you find a new side after to love, doesnt that mean you’ll love your partner even more?”

“Throughout all of history, no wise king has ever forced his army to obey him through oppression. People will only truly fight for what is right. And there is only one thing that is truly right in this world! The one true, unchanging righteousness in the world is… cuteness! Cute makes right! All our needs, desires, and instincts seek cuteness, and it is for cuteness that we will give everything we have! That’s just the way men are!”

“My name is Lelouch vi Britannia, I am the eldest son of Empress Marianne, the prince who was abandoned by his empire. If anyone wishes to stop me, let them try, if there is anyone who can go beyond my despair.”

“Being strong on your own is meaningless. To have power you need other people, and they need a world where they can be at their best.”

“I’ll tear you apart.. Once my hand heals, I’ll rip you apart.. tear you to shreds.. rip you into tiny pieces.. And eat you.”

“Upon researching the concept of demons, I believe that, among all life, humans are the closest thing to it.”

“A rotten world. Politics, law, education… Was there anybody around who could correct this world? But someone had to do it.”

“It is time to take back what is mine. I will not live my life as your second. That time is over. Every breath you take is an assault on my honor. But no more, by my hands you will be cut down inch by inch! The same way you have cut down my Pride!”

“I controlled myself. The damage to your skin isn’t nearly as bad as it feels.
You can call me Roy Mustang, or just Lieutenant Colonel. Hell, you can call me the Flame Alchemist. Whatever you do, remember the pain.”

“Can’t go to sleep unless I leave the lights on
You don’t know how many fuckin’ demons I know
Maybe I should go try to read the bible (Fuck! Oh no!)
I don’t even like rap, the only thing I wanted was just to be cool
& hang out with a group of fans & solve mysteries like I’m Scooby Doo
But I got way more than I bargained for
You can’t chill when your heart is sore
I’m so mad I could start a war, so fuck Hopsin
Man I don’t really know who I are no more!”

“I’m going to keep fighting until this world is the way it should be. Until the world is balanced.”

“You act more like a cockroach than a proper vampire. Left to your own devices you would cover the world in your filth. I can’t stand your kind. You don’t have the self-respect to be a vampire, you undead maggot. You barely even know what you are.”

“We’re all puppets Laurie. I’m just a puppet who can see the strings.”

“The difference in strength…what about it? Do you think I should give up just because you’re stronger than me? I’ve always known you were strong. Nothing I see now will change my mind. I will defeat you.”

“Humans are often worse than demons.”

“I don’t believe in god. There’s no proof he exists. In a world where there isn’t even proof of the future, the past exists. Even if it’s tainted with misunderstandings and delusions, if the people themselves believe in it, the past is the truth to them. And, if you base your actions or your life around it, in a way, it’s a type of god itself.”

“People need dramatic examples to shake them out of apathy and I can’t do that as Bruce Wayne. As a man I’m flesh and blood, I can be ignored, I can be destroyed, but as a symbol, as a symbol I can be incorruptible. I can be everlasting.”

“This is our city. We’ll do whatever the fuck we want.“