Home / Xat / Designers have no Support

Designers have no Support

Recently the management @ xat.com has made it a real pain for designers to get their images up and working with virtually no support at all for image hosting, a few users have tried different ways and were working all well until one of em got bored and decided to breach the Admin’s trust. In response to that the image hosting website was taken down completely and previous images were all blocked on any chat or xatspace. I went to the forums furious at what they had done to tell them of the issue and to demand a fix, instead of fixing it, their volunteers (SPELL – YOU THINK I DONT KNOW?) deleted my thread and banned me until next year. Now I will leave the original thread up on my own forums so you can tell me exactly what was inappropriate with it or where it went wrong to earn me a 6 month ban. I also went to help to confront Spell and surprisingly he went offline almost immediately, that’s some shady bull right there. Not ONCE did I get any warning or reply, it was direct trash bin and ban.

Especially since I had support from a handful of users saying they want the same thing, why give so little care when you know what you did is wrong and on top of it punish someone who only wants good for the site that is graphically a mess. Users have a set of 20ish photobucket backgrounds to use as inner wallpapers and that’s about it. The site design has been updated twice since I’ve been on it and people always seem to disagree on if it looks good. Instead of blocking designers senselessly, let them help you. It won’t cost you a thing. But I guess brains aren’t mandatory in the world of today.

Until that clears up, I refuse to make Graphics for anyone, and if you’re fedup with the way they work I suggest you do the same, or don’t I don’t even care at this point.

UPDATE: A different website has been unblocked, but it’s virtually the same as xatimg.me yet guess who’s still banned? 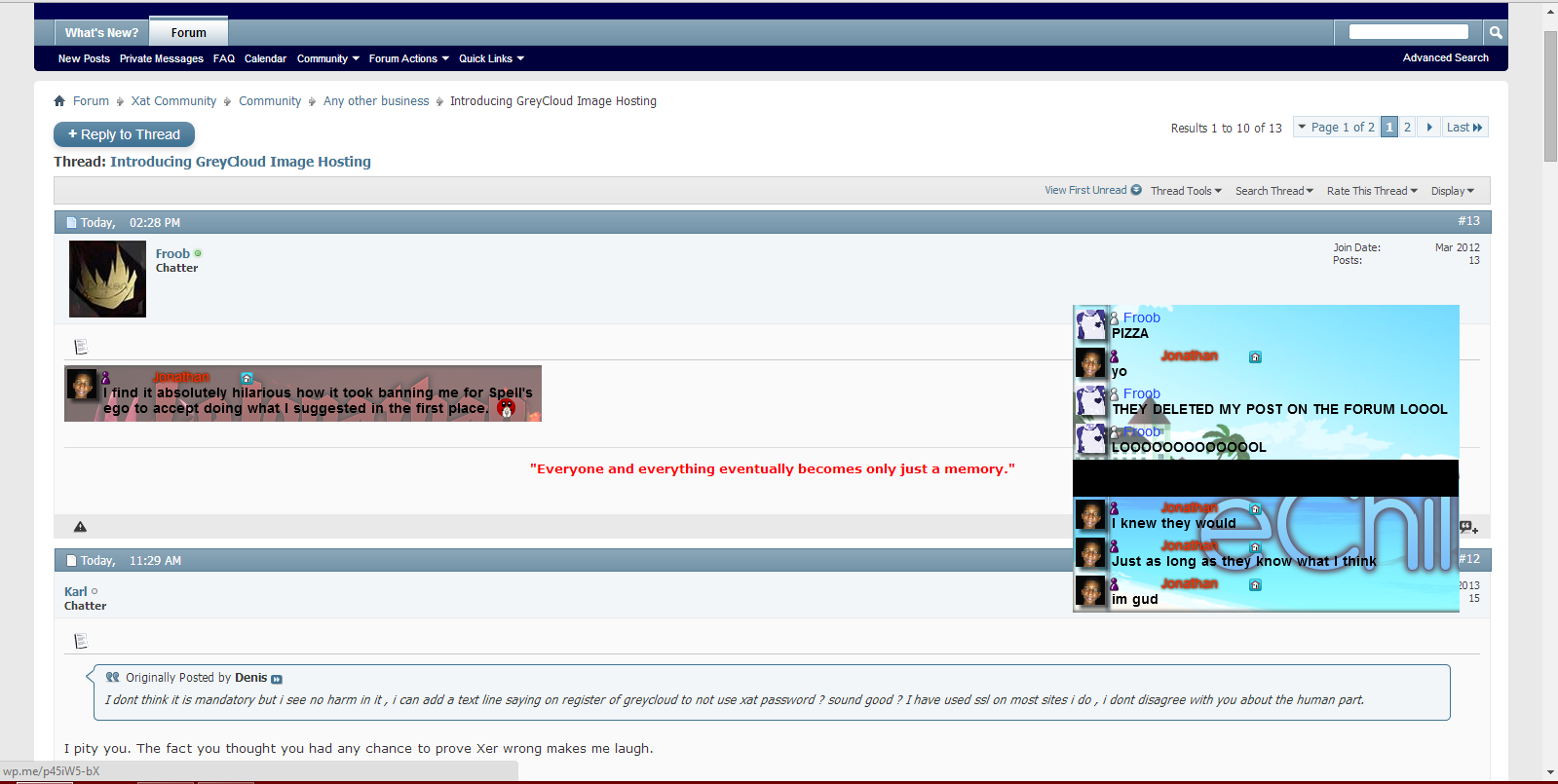 UPDATE 2: Spell Blocked Greyimg for (cough) “Security Purposes” this time. Not even a day after my post.

UPDATE 3: Vols in Shining armour? I think not. Made me re-upload every one of Lexi’s backgrounds specifically to imgur.com which took me about an hour, I’m not even gonna count the 3 hours it took him to give me a straight answer about how to deal with this situation and finally when I was done..

He signed off and never replied to me.

UPDATE 4: Didn’t notice I got re-banned forever but someone was nice enough to point it out to me aaaand